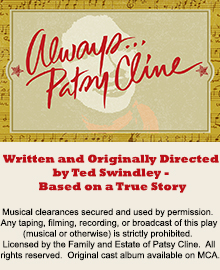 JENNY LEE STERN* (PATSY CLINE) is thrilled to be back at the Honky-Tonk! This will be her third time portraying the country music legend, seen previously at the Mountain Playhouse and Maine State Music Theatre. Jenny has recently gained critical acclaim for her performance in the newest edition of FORBIDDEN BROADWAY: ALIVE & KICKING portraying Patti LuPone, Bernadette Peters, Sutton Foster, Judy Garland and many more. Ms. Stern originated the role of “Mary Delgado” in the Tony Winning JERSEY BOYS in the original Chicago and Toronto companies as well as performing on the 1st National Tour. She has been seen across the country and worldwide in numerous stage productions and in your living room on HBO’s THE SOPRANOS. Jenny is the beaming wife of Broadway and television actor Jeremy Kushnier and mother to their two little cowgirls, Nora Bella and Penelope Shayne (affectionately nicknamed “Patsy.”)

ROBIN BAXTER* (LOUISE SEGER) is more than excited to make her debut as Louise in ALWAYS…PATSY CLINE. Her credits include Rosie in MAMMA MIA on Broadway, National Tour, and Vegas; Betty Blast in FOOTLOOSE on Broadway; Mrs. Cratchit and Mrs. Fessiwig in A CHRISTMAS CAROL at Madison Square; and KING DAVID on Broadway; Favorite Regional Credits are Pitti-sing in HOT MIKADO, Ford’s Theatre; Barbara Demarco in SHEAR MADNESS, Kennedy Center; Maxine in WEST MEMPHIS MOJO at Studio Theatre; and Colombia in THE ROCKY HORROR SHOW at Woolly Mammoth Theatre. She writes and performs in her own one-woman shows, ROBIN BAXTER’S BEAUTY TIPS & CHAINSAW REPAIR SHOW, COMIN’ IN FROM THE REAR, SLEEPING WITH STRANGERS, and most recently BAXTERNORMAL, an account of the struggles of a Broadway Actor/Hairdresser over a thirty year period, in the hopes of helping to diminish the stigma against mental illness. Extends love to friends and family for their support and patience.

CHELSEY LYNN ALFREDO (PATSY UNDERSTUDY/OFFSTAGE SINGER/ACTING INTERN) is ecstatic to be spending her summer with Infinity Theatre Company! She is a recent 2012 graduate of Wagner College, with a B.A. in Theatre Performance, and currently resides in Westchester, NY. Some favorite credits include: Pennywise in URINETOWN, Lady of the Lake in SPAMALOT, Rose Alvarez in BYE BYE BIRDIE, Dorothy in THE WIZARD OF OZ, Stepsister-Joy in CINDERELLA, Vivienne in LEGALLY BLONDE, Rusty in FOOTLOOSE and Marty in GREASE. She is incredibly thankful to all her family and friends for the constant love and support!

MAX KING (OFFSTAGE SINGER/ACTING INTERN) is so excited and grateful to be a one of Infinity’s acting interns this summer! Originally from Lebanon, NH, and is a recent and proud graduate of Wagner College, Class of 2013. Favorite roles include Henry in NEXT TO NORMAL, Emmett in LEGALLY BLONDE, Ren in FOOTLOOSE, and Hanschen in SPRING AWAKENING. Thanks to my family and everyone else who has helped me get to where I am today!

CARLY SCHNEIDER (LOUISE UNDERSTUDY/OFFSTAGE SINGER/ACTING INTERN) is delighted to be spending a summer with Infinity Theatre Company! A recent graduate of Missouri State University (B.F.A. Musical Theatre) favorite MSU credits include Susan Waverly in WHITE CHRISTMAS, June in THE MUSICAL OF MUSICALS, THE MUSICAL!, as well as originating the role of Sister in Nathan Tysen & Ryan McCall’s new musical NOAH’S ART. Professional credits include Sabine in THE THREE MUSKETEERS, Robin in GODSPELL, as well as a summer cross-country tour with Missoula Children’s Theatre. Thanks to Anna & Alan Ostroff for this wonderful opportunity, as well as my beautiful family for their love and support! www.CarlySchneider.org

TIM ROSSER (MUSIC DIRECTOR/PIANIST/CONDUCTOR) is a NYC-based freelance music director, composer and pianist. Credits include: music director for this past year’s BC/EFA benefit BROADWAY BACKWARDS at the Palace Theater, keyboards for THE ADDAMS FAMILY on Broadway and CARRIE at the Lucille Lortel, and Music Director of several years for Making Books Sing’s beautiful musicals for young audiences and THE WATER COOLERS hilarious music and comedy act. He is also proud to be pianist for the Blue Hill Troupe, NYC’s Gilbert and Sullivan charity. Tim is an alumnus of Oberlin Conservatory, the advanced class of the BMI/Lehman Engel Musical Theater Writing Workshop and the Johnny Mercer Songwriters Project at Northwestern University. His songs have been heard at his sold-out show at 54 Below with Charlie Sohne, Cutting Edge Composers IV at Joe’s Pub, NYTB at the D-Lounge, NEXT’s Emerging Composers Concerts, The Holiday Songbook at the Lincoln Center Library, and the Zipper Theater. Please visit www.RosserAndSohne.com for more info!

WES SHIPPEE (SOUND DESIGNER) is an NYU graduate and Drama Desk-nominated musician, sound designer, and audio engineer. Notable projects include the Radio City Christmas Spectacular and seven years of work with RadioTheatre, garnering multiple New York Innovative Theatre awards. Wes recently mixed mainstage shows aboard Norwegian Cruise Line’s M/S Pride of America in Hawaii as Head Audio Engineer, and is the house engineer at the New School for Drama. He is also the keyboard player for the Yoni Gordon Orchestra (www.yonigordon.com) and Grammy-winning artist Moneybrother (www.moneybrothermusic.com). Wes is thrilled to have been with Infinity for four consecutive summers here in Annapolis. You can find him online at www.Wes.sh, or in real life by turning around in your seat.

CAROL A. SULLIVAN* (STAGE MANAGER) returns for a second Infinity season including DAMES AT SEA (2012), that compliments credits including work on Broadway, Off-Broadway and beyond. An active Actors’ Equity member who enjoys volunteering for B’way Bares / Equity Fights AIDS and the 52nd Street Project.

CLAYTON COLWELL (GUITAR) is a composer and music producer based in New York City. He received his masters degree in composition from the University of Cincinnati, was the co-founder of award-winning rock band Hector On Stilts, and currently is half of the quirk-pop duo Colwell (www.colwellmusic.com). Clayton’s songs have been heard on ABC-TV (Brothers and Sisters, Three Moons Over Milford), and he has written theme songs for cartoons (Freezer Burn, G) as well as children’s theater (Arts For All, Infinity Theater Company). He has toured the US and most of Western Europe with various rock outfits and calls Tucson, AZ home.

DAN HALL (BASS) has a classical background and was a student of William Rhein of the Boston Symphony Orchestra throughout his years at The University of Maine and at The New England Conservatory of Music. He has played electric and acoustic bass in house bands in all the major casinos in Reno and Lake Tahoe, NV, freelanced in Austin, TX, and performed in numerous live stage shows and big bands in Branson, MO, including The Lawrence Welk Orchestra and Les Brown’s Band of Renown. Since moving to Virginia in 2006, he has played bass in musical theater productions at The Kennedy Center, Arena Stage Theater, Ford’s Theater, Montgomery College, The University of Maryland, Signature Theater, Studio Theater, Shakespeare Theater, and the Hippodrome Theater in Baltimore. He also has had numerous private students at his home studio which is now in Falls Church, VA.

ELE RUBENSTEIN (DRUMS) is an established drummer in the DC metropolitan area. After receiving a Jazz Performance degree from Temple University in Philadelphia, he returned to his hometown of Takoma Park to pursue a career in music. Ele has shared the stage with many well known jazz artists, such as Terell Stafford, Wycliffe Gordon, Ralph Lalama, and Chuck Redd. He has also performed at notable venues including Blues Alley in DC, Kimmel Center in Philadelphia, and Lincoln Center in New York City. Ele is excited to be a part of Infinity Theater’s production of ALWAYS…PATSY CLINE.

LAUREN WRIGHT (FIDDLE/ACTING INTERN) is thrilled to be joining Infinity Theatre Company for her first summer as an Acting Intern. This season, she will be playing fiddle in the band for ALWAYS…PATSY CLINE and is a part of the ensemble for SHE LOVES ME (U/S Amalia). She will also be playing various roles in the children’s production, PINOCCHIO. Lauren is originally from Evansville, IN and is a recent graduate of Belmont University, earning her BM in Musical Theatre. Recent Belmont theatre credits include Eponine in LES MISERABLES, Penny Pingleton in HAIRSPRAY, and Mary Lennox in THE SECRET GARDEN. Last summer, Lauren worked at the Bigfork Summer Playhouse playing Gabriella Montez in HIGH SCHOOL MUSICAL and Zaneeta Shinn in THE MUSIC MAN. She is a proud member of the Alpha Chi National Honor Scholarship Society and Phi Kappa Lambda National Music Honor Society.

JULIE BAYS (WARDROBE SUPERVISOR) has been involved in costuming plays in the Annapolis area for the last twenty years. Favorites include BEAUTY AND THE BEST, LITTLE WOMAN, and MACBETH. She enjoys being creative and helping others learn they can also be creative. She is thrilled to part of Infinity Theatre for this summer! Thanks Alan and Anna for this opportunity! Julie is very thankful for family!

GREGORY RYAN JR. (PRODUCTION MANAGER) is a Penn State graduate with his B.F.A. in Stage Management. This is his first season as Production Manager with Infinity Theatre Company. He is also the event Production Manager with H+G PRODUCTIONS and VCI WORLDWIDE. Stage Management credits include: Off-Broadway: MISS ABIGAIL’S, GIRL TALK, and NORMAN DOESMEN. Regional: THE LARAMIE PROJECT – EPILOGUE, CTRL + ALT + DELETE, WAIT UNTIL DARK, THE DINING ROOM, and OKLAHOMA!. Gregory is a proud member of The Hive Theatre Company, Royanth Productions, and Actors’ Equity.

JAZMINE HARPER-DAVIS (TECH INTERN) is a rising senior DePauw University in Indiana studying Communications with a major focus in theatre. She spent most of her theatre on the stage but since studying at school developed a great passion for the design and technical aspect.Her biggest scenic accomplishment is designing the set for DPU’s Fall 2012 musical “Into The Woods” which was entered into ACTF. She recently held scenic and marketing internships in New York City this past spring and is excited to be in her home state of Maryland working as the technical intern for Infinity Theatre Company. Many thanks to her family, friends, and those awesome people at Infinity Theatre Company.

SYDNEY RUSAK (ASSISTANT STAGE MANAGER/INTERN) is a BFA stage management student at Penn State University. Her stage credits include FROM UP HERE as assistant stage manager; THE 25TH ANNUAL PUTNAM COUNTY SPELLING BEE and THE DANCE CONCERT: TALES FROM MY BODY as stage manager with Penn State Centre Stage.

ANDREW WAY (OFFSTAGE SINGER/ACTING INTERN) is thrilled to be making his Annapolis debut with Infinity Theatre Company. Hailing from Raleigh, NC, Andrew is a rising senior at Baldwin Wallace University in Cleveland where he is pursuing his Bachelor of Music in Music Theatre. When he isn’t onstage, he can be found playing piano, guitar, and mandolin, or singing in such venues as Carnegie Hall, Duke Chapel, and Hines Chapel. Favorite credits include Young Buddy in FOLLIES (Baldwin Wallace University), Ernst in CABARET (Timber Lake Playhouse), Marius Pontmercy in LES MISERABLES (Broadway Series South), and Sid Sorokin in THE PAJAMA GAME (Enloe Theatre Company). www.Andrew-Way.com